Three Moray mothers have lifted the lid on their traumatic Parental and Infant Mental Health (PIMH) experiences amid efforts to improve the region’s peer support. 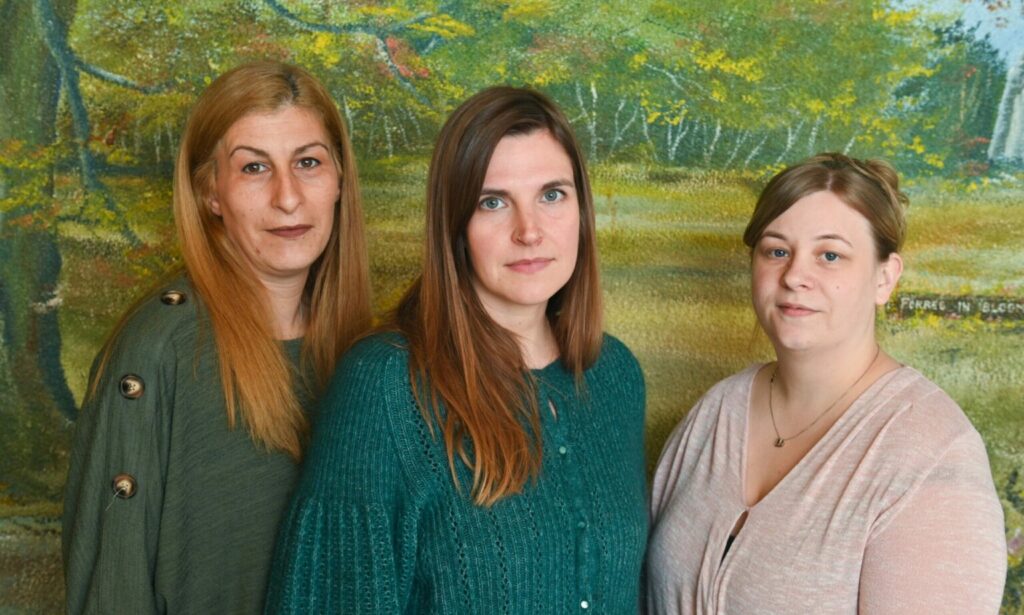 Champion and Peer researchers Becca Scott, Jenny Fraser Harris and Vikki King have spoken out about their experiences. Picture by Jason Hedges, Press and Journal.

The trio are Peer Researchers in a project being led by Moray Wellbeing Hub, Children 1st and UHI Moray. There is often a stigma attached to mental health challenges in pregnancy and early parenthood. This can stop mothers and fathers coming forward in their time of need.

Focussing on the support parents can give one another, the year-long project will include events, groups and surveys. It will also seek to hear people’s experiences, including from those in more rural areas, minority ethnic communities and young people.

The experience of having a child  during the Covid pandemic

Vikki King gave birth to Layla on May 16th 2020 against the stressful backdrop of the ever-changing pandemic climate. She had to be rushed to Aberdeen from Dr Gray’s Hospital in Elgin by ambulance as a precaution. The 33-year old said: “I gave birth to my second child during lockdown. I had to see a metal health midwife as well as my normal midwife as I had suffered various metal health issues, including postnatal depression, with my first born.”

“I was blue-lighted to Aberdeen as a precaution as my daughter pooped in my waters. My husband wasn’t allowed in the ambulance with me. I was anxious and it was uncomfortable being strapped to the bed with no paracetamol or any gas and air until just outside Aberdeen. The midwifery support was non-existent but the birth went fine.”

She added: “No one, pretty much, got to see her apart from my mum. My daughter still doesn’t really like people and being held which is probably caused by the pandemic. I remember my other daughter being scared when a health visitor came round to check on her sister, all kitted up in PPE.She wasn’t allowed in the room at the same time which was strange.” She hopes the project can help parents with similar experiences support each other.

In 2018, Becca Scott endured the “extremely scary” experience of wondering if her baby was going to be alive when being transferred from Dr Gray’s to Aberdeen. Despite being seven weeks early, thankfully her daughter Xanthe was born healthy.

The 41-year-old recalls: “At 33 weeks I had a bleed and was rushed initially to Dr Gray’s. I was contracting on arrival. They consulted with Aberdeen who wanted me transferred immediately but the midwives in Elgin were unhappy with this due to being such a high risk.”

“I have a tendency to have my babies early. However they successfully stopped my bleeding so thought I was safe to transfer. I endured a horrific ambulance journey to Aberdeen strapped to a bed with no pain relief and two midwives as I was such a risk. I didn’t think my baby was going to be alive when we got to Aberdeen.”

“It was extremely scary and I went straight away for a section as my bleeding had started again with the journey. My daughter was born healthy and only required a week in the neonatal unit.” Becca believes that peer support could be a “vital tool” to help parents deal with the struggles.

Jenny Fraser Harris moved from Glasgow to Forres when she was five months pregnant. She wanted to raise her child in a community setting rather than the busy city life. The 38-year-old has opened up about feeling isolated through pregnancy and early parenting.

Jenny said: “We wanted to move out of the city and look for something that felt more community-oriented and also had the green spaces. My daughter Noah was born in March 2019 in Aberdeen. She turned one basically as the country plummeted into lockdown.”

“I left my job, friends and family to move up to Moray. I felt isolated and a lot of grief was coming up as I lost my mom when I was in my 20s. At the time I didn’t know where to reach out for support. Now I hope being involved with this project can help drive awareness about the support there.”

How can you get involved?

Click here to fill out a survey with your thoughts about the Parental and Infant Mental Health and Wellbeing Support in Moray. The survey closes on Sunday July 31st.

The project receives a grant from The Ideas Fund, which is funded by the Welcome Trust and delivered by the British Science Association with coordination locally by Science Ceilidh.

From an article published in the Press and Journal, June 7th 2022